Skip to content
1
Turn A Pumpkin Into A Keg
Carving a pumpkins is cool… but we have a suggestion for a much better way to use your pumpkins: turn them into kegs and fill it with beer (or a tipple of your choice).

2
Make Drinks with Dry Ice
Up the spook factor on your potions cocktails by adding dry ice. (Just make sure your guests don’t actually drink the ice and use tongs while handling it, so you don’t get frostbite.)

3
Make Glowing Jelly Shots
The party doesn’t start until the shots come out, and nothing gives off that eerie vibe like Jelly shots that glow.
Method: http://www.delish.com/cooking/recipe-ideas/recipes/a44347/glowing-jell-o-shots-glow-party-foods/

4
Cobweb Cakes
Some white icing/frosting and a toothpick are all you need to turn a cake or gooey brownie into a halloween inspired treat.

5
Mummy-fy Brie
If there’s one ingredient you should have on hand at all times, it’s puff pastry. Use pastry strips to turn your basic baked brie into a totally spooky mummy that’s creepy enough for the holiday, but still totally delicious.

6
Store Sweets and Treats in Chocolate Cups
Make trick or treating a little more interesting, make edible bowls out of chocolate. Because there’s no such thing as too many sweets on Halloween.

7
Turn Your Apples into Shrunken Heads
Cleverly carved apples are the easiest way to spook up a plain bowl of cider or punch.

8
Serve Dessert (or cheese) In Pumpkins
You didn’t really want to wash dishes at your party, did you?

In a medium bowl, whisk together the flour, baking powder, nutmeg, cinnamon, sugar and salt.
In a separate large bowl, whisk together the egg and buttermilk and then whisk the egg mixture into the flour mixture just until combined.
Slice the apples into 1/4-inch-thick rounds. Using the cookie cutters, cut each apple slice into rings, discarding the center core.
Add 3 inches of oil to a large heavy-bottomed pot set over medium heat. Line a sheet tray with paper towels.
When the oil reaches 180C, begin by dipping each apple slice in the batter, shaking off any excess then carefully lowering it into the oil.
Add several apple slices to the oil but do not overcrowd the pot. Flip the apple slices occasionally so that they brown on all sides then using tongs, transfer them onto the paper towel-lined baking sheet.
Repeat the battering and frying process with the remaining apple rings.
While still warm, dip each fritter into the sugar cinnamon mixture, shake off any excess and serve with salted caramel ice cream.

Did you know…it takes about 36 apples to create one gallon of apple cider…LETS GET PICKING!!

We all know already how delicious ice cream is on its own but how often do you enjoy your favourite sweet treats with a helping of ice cream…we’ve been looking into more ways that we can fit more ice cream into our lives!These dessert pairings will be sure to have you running to the freezer (or the shop if you’ve already eaten it all)…

Thai Bounty
Try warm chocolate fondant with our Toasted Coconut ice cream, we lightly toast the desiccated coconut by hand to bring out the delicious authentic coconut flavour. The mixture of the warm fondant and the cold ice cream together is a melting masterpiece. 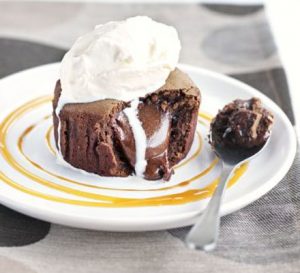 Banana Fritters
Coat bananas in panko breadcrumbs and deep fry; pair with our Vanilla ice cream and drizzle with a little caramel sauce or brittle for a quick and easy taste of the Far East! 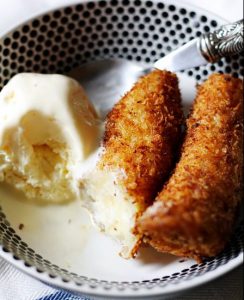 Mango Sticky Rice
A firm favourite across Asia is sticky rice pudding, top with some fresh mango slices and a scoop of Mango Passionfruit Ripple ice cream…i promise you won’t be disappointed! 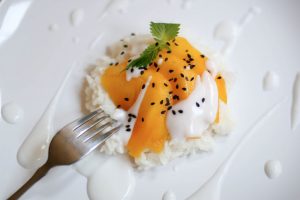 Pandan Pudding
Hands up who knows what pandan is?….This under appreciated flavour; extracted from the pandan leaf is often said to taste like a cross between vanilla and pistachio and found mainly in Malaysia and the Philippines. Especially delicious in desserts and ice cream, our award winning chocolate miso ice cream compliments this perfectly.

The results are in……and we are pleased to announce that we won a 1 star Great Taste Award for our Chocolate Miso Ice Cream, our new flavour this year has soon become a favourite! Judges described the ice cream as ‘a rich deep chocolate flavour with an intriguing salty/savoury flavour that highlights the chocolate’.
Our Chocolate Miso Ice Cream is available for delivery right to your door! Just follow the link below to get yummy Yee Kwan treats without leaving the comfort of your home.
https://www.ocado.com/webshop/getCategories.do?tags=%7C20000%7C20911%7C38179%7C38180%7C144861
Over the years since Yee Kwan began we have won a number of Great Taste awards…how about we take a little trip down memory lane…
**Pomegranate**Packed with antioxidants and nicknamed ‘Nature’s power fruit’, pomegranates are a no-brainer when it comes to your health. In fact, some studies show the fruit, which has around 600 seeds, contains almost three times the total antioxidants in green tea and red wine.

The acai berry, touted by Oprah as a ‘super food,’ grows in South American rainforests. This dark berry has been shown to have twice the antioxidants found in blueberries, as well as omega fatty acids, protein and fiber. It’s so powerful, some studies have shown it kills off cancer cells in a lab setting.

It’s not just about the guacamole when it comes to avocados. The avocado fruit (often thought to be a vegetable) contains healthy monounsaturated fat, which has been linked to a reduced risk of cancer, heart disease and diabetes and fatty acids, avocados can help lower LDL (bad cholesterol) levels while raising the amount of good cholesterol in your body. The healthy fats in avocados also promote the absorption of other carotenoids—especially beta-carotene and lycopene—which are essential for heart health.

Native to North America, blueberries are a staple in this country. These little blue berries are loaded with antioxidants and have been also been linked to anti-aging, improved vision and brain function.

Found in the Goji in China, Mongolia and in the Himalayas in Tibet, goji berries have been used for 6,000 years by herbalists to protect the liver, help eyesight, improve fertility, strengthen the legs, boost immune function, improve circulation and promote longevity. The berries contain carotenoids that act as antioxidants to protect the retina of the eye.

Need your daily dose of vitamin C? Try some kiwi fruit. They contain a high amount of vitamin C (more than oranges) and as much potassium as bananas.

The tomato pretty much tops our list of Superfruits (even though some people still think it’s a vegetable). Tomatoes pack a sought-after antioxidant called lycopene, which is rarely found in other Superfruits, and they’re high in vitamin C, potassium, and fiber, and super-low in calories.